Old Greenwich CT is a coastal neighborhood in the town of Greenwich, located in southwestern Fairfield County. Consisting of 6,600 residents, Old Greenwich sits along the Long Island Sound, located just miles from the New York border. We’ll explain why Old Greenwich, Connecticut is thought of as one of the nicest neighborhoods in the state and why you should consider a visit. 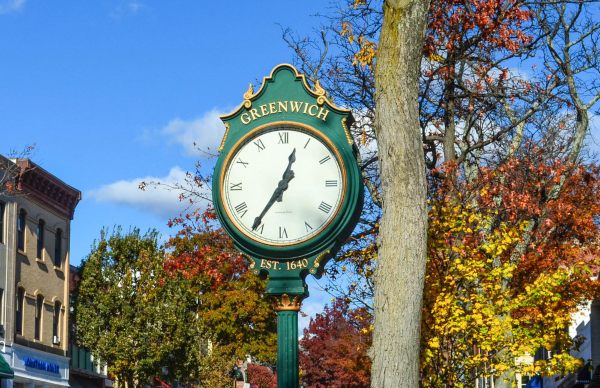 Old Greenwich was partially founded by a woman named Elizabeth Fones, who was a relative of John Winthrop, the Massachusetts Bay Colony which covered much of what is now central New England. In fact, the area was once referred to as ‘Elizabeth Neck’ as a nod to Elizabeth Fones following her purchase of the area in 1640.

In the 19th century, Old Greenwich was known as “Sound Beach”, which you will see referenced to this day throughout the area. One example is Sound Beach Avenue, which is the main road through the small downtown.

At the southwest end of the neighborhood lies the the town’s local beach, lovingly called “Tod’s Point” after a former resident. The beach is now public property, which belongs to the town of Greenwich.

Things to do in Old Greenwich CT

Playland proudly billed itself as “America’s Premier Playground”. Increasingly crowds came to witness–and participate in–spectacles and events. Playland evolved into much more than amusement rides; it became a place to see circus acts, dance under the stars, win a new car, and crown the most beautiful baby in Westchester.

The Maritime Aquarium is the only aquarium focused on Long Island Sound. From this core, it explores related animals and conservation issues from around the world. Its exhibits are carefully designed to give people of all ages entertaining, educational, and emotional experiences with animals.

When water damages your property, you must act fast! Call Restoration 1 of Fairfield for immediate water removal and water extraction. We respond 24/7 to offer water damage restoration in Old Greenwich CT and surrounding areas.

When a fire destroys your property, it is devastating. Serious damage arises from flames, smoke, and ash. To return your Old Greenwich home or business to pre-loss condition, call Restoration 1 today. We offer free inspections.

So many things need to be done after a fire, including cleaning the smoke. Many Old Greenwich CT residents attempt DIY smoke cleaning. But, this is a job for a professional smoke damage cleanup company. Call Restoration 1 today.

Mold is a serious health hazard that results in runny eyes, difficulty breathing, sore throat, skin rashes, and even death. If you find mold in your Old Greenwich property, it is time to contact Restoration 1 of Fairfield!