Stamford CT sits along the Long Island Sound, marking the halfway point between Manhattan and New Haven. The diverse community is home to more than 129,000 people from a myriad of ethnic, socio-economic, and religious backgrounds. We’ll explain exactly why Stamford, Connecticut is such a wonderful place to live, work, and visit.

A Brief History of Stamford, CT

Stamford, or Rippowam as the Siwanoy Native Americans called it, saw its creation on July 1, 1640 when Captian Turner of New Haven Colony and Chief Ponus signed the deed. The town carved an interesting history during the time, holding witch trials in 1692 similar to those at Salem.

In 1801, New Canaan separated from Stamford. Darien followed in 1820. During this time, Stamford developed a reputation as a primary merchandiser of water thanks to its close proximity to New York. Speaking of New York, many of the Big Apple’s residents summered along the Stamford shoreline. Others chose to establish their roots in Stamford, commuting to Manhattan by train. In 1893, Stamford incorporated as a city. 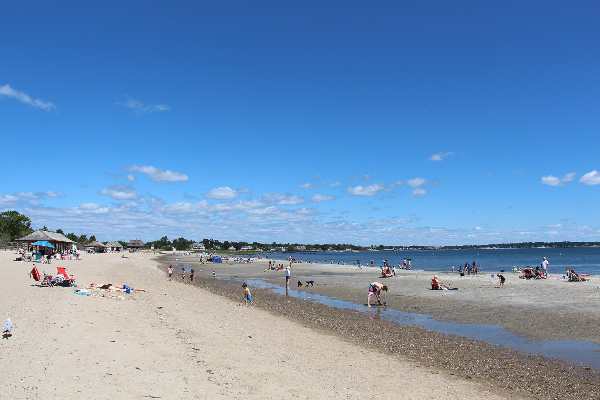 The 1960s and 70s saw a boom in the local commercial real estate industry due to relocation of corporations outside of New York. A redevelopment campaign shortly followed, prompting construction of several tall buildings in Stamford. The F.D. Rich Company built Stamford’s tallest building at the time – One Landmark Square. Additionally, the company constructed the GTE Building (now known as One Stamford Forum), the Marriott Hotel, the Stamford Town Center, and many other structures. Over the years, other buildings have come to tower over these structures, effectively building up the Stamford skyline.

In more present times, Stamford has continued to see its population increase. This is largely in part due to redevelopment projects that include new residential, retail, office, hotel, and marina spaces. Restaurants and recreational activities continue to pop up to support the city’s growing numbers. You’ll find activities such as music, theater, film, and fine art.

Things to do in Stamford CT

This 118-acre attraction will delight the whole family. Heckscher Farm, Overbrook Nature Center, the Bendel Mansion, Nature’s Playground, the Stamford Observatory, Animal Embassy, and several changing exhibits comprise the Museum & Nature Center. Hop on one of the hiking trails to enjoy the beautiful flora and fauna.

Looking to take in a show or concert? Don’t miss The Palace Theater! The theater sits in the heart of Downtown Stamford and offers amazing comedy, music, theater, and dance acts. Admire the 1927 main stage or grab a refreshment in the club-like atmosphere of UpStage. For a night of cultured entertainment and joy, The Palace Theater is your go-to place.

RPM Raceway is sure to satisfy your need for a thrill. Strap on your seatbelt and get ready to race! At RPM Raceway, you’ll find an all-electric go-karting experience. Once you step out from behind the wheel, be sure to check out the VR battles, racing simulators, state-of-the-art arcade games and luxury bowling.

When water damages your property, you must act fast! Call Restoration 1 of Fairfield for immediate water removal and water extraction. We respond 24/7 to offer water damage restoration in Stamford CT and surrounding areas.

When a fire destroys your property, it is devastating. Serious damage arises from flames, smoke, and ash. To return your Stamford home or business to pre-loss condition, call Restoration 1 today. We offer free inspections.

So many things need to be done after a fire, including cleaning the smoke. Many Stamford CT residents attempt DIY smoke cleaning. But, this is a job for a professional smoke damage cleanup company. Call Restoration 1 today.

Mold is a serious health hazard that results in runny eyes, difficulty breathing, sore throat, skin rashes, and even death. If you find mold in your Stamford property, it is time to contact Restoration 1 of Fairfield!